The City of Northampton was incorporated in 1884. The city government consists of an elected mayor, city council, and city clerk. The mayor is the chief executive officer of the city and serves a four year term.

The City Council consists of nine members; seven ward councilors and two at-large councilors each serving a two year term. The city is divided into seven wards with a roughly equal number of voters in each ward. The city council is the legislative body for the city and is responsible for adopting the budget as prepared by the mayor and for adopting city ordinances. 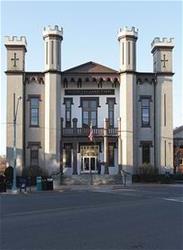